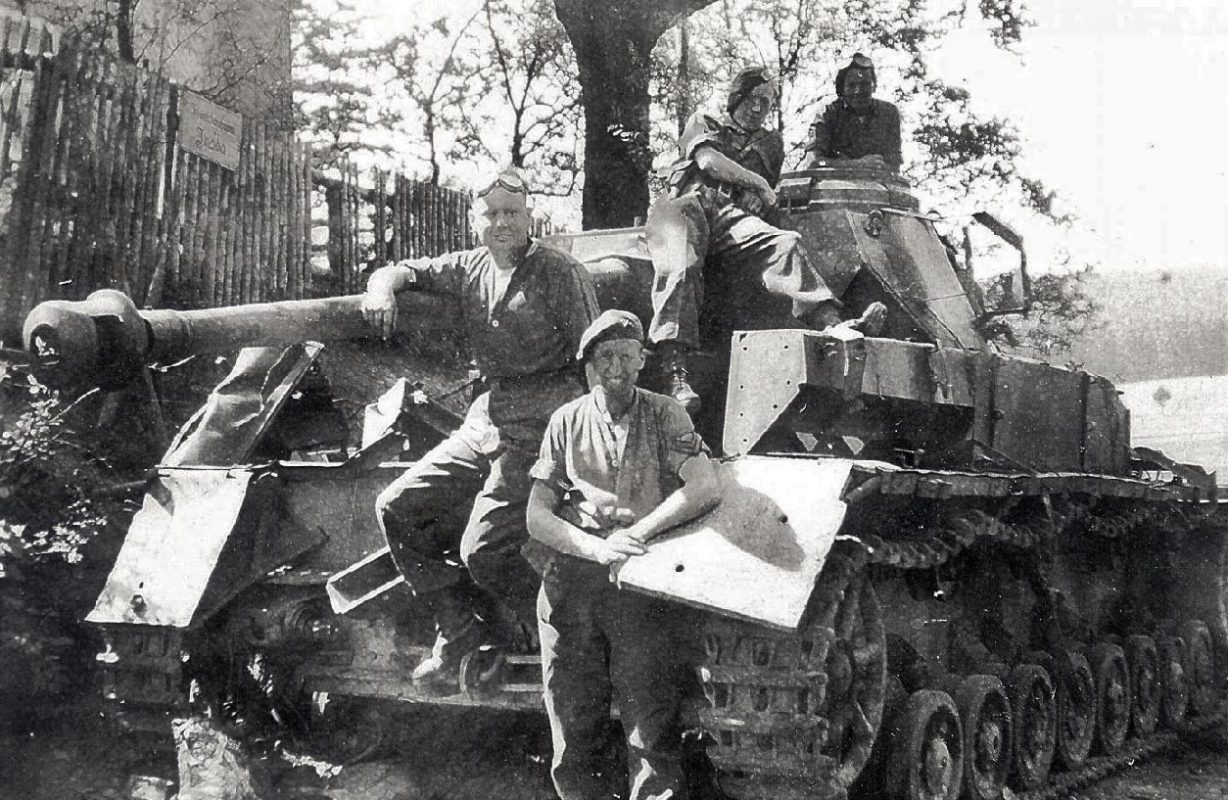 Members of 2742 Squadron pose next to a destroyed German tank in the Ardennes.

Detachments of the RAF Regiment were involved in their first defensive battle in Western Europe during the Battle of the Ardennes.

Those units present at the time were employed to protect RADAR stations – one of the chief commitments of 85 Group.

Prelude to the Battle of the Ardennes… At 3:10pm on the 16th of December 1944 the troops of 500th Werfer Regiment, Waffen SS finished topping off the tanks of the A4 ballistic missile at a secret location in Northern Holland. The regiment’s mission was simple – bombard Antwerp and hinder the allies from getting stores ashore. The mission had started in October 1944 when it had become clear that the Allies would need a deepwater port because of the failure of Operation Market Garden. The city of Antwerp was to see almost double the number of V2 attacks on it than were made on London.

120 MILES TO THE SW OF ANTWERP

In December 1944 the Wehrmacht launched its last desperate gamble to disrupt the Allied advance by striking at the junction between the American and British armies in France. Twenty German divisions from the 5th and 6th Panzer Armies erupted from the wooded hills of the Ardennes and struck at the five American divisions which stood between them, the River Meuse, Antwerp and the rear echelons of the British and Canadian armies in Belgium and Holland. Although RAF Airfields were not threatened by the initial impetus of these attacks, the RAF’s 72 Wing, with its forward radars and wireless interception units, certainly was.

C Flight 2742 Sqn were ordered forward on the 17th December to reinforce 2811 Rifle and 2804 Armoured Car Squadrons which formed 72 Wing’s covering force enabling the technical units and their Regiment squadrons to fight their way through the confused situation which developed to the west of Bastogne as German special forces in American vehicles and uniforms spread alarm and despondency in what had been the rear area.

The armoured cars of “C” flight were to help those of 2804 squadron extract an RAF signals unit (No. 6080) which had been at Houffalaize, north of Bastogne. The squadron adjutant, Flying Officer Roberts, together with LAC Byron-Arnold proceeded to Bastogne in advance of the rest of the flight. On arriving at US Army 8th Corps HQ at noon on the 18th, “information received that the enemy breakthrough was quite serious!”

Attempting to reach Houffalize, F/O Roberts had to contend with shelling of the road and was going against the tide, “the roads were full of US vehicles moving back towards Bastogne”. By 19.20 hours, F/O Roberts was advised by the 8th Corps war room:

“Tiger tanks had penetrated quite deeply within 5 miles of Bastogne. Left driver at war room to bring back any urgent information.” At 21.30 hours, “Whilst party returning to Champlon [where the rest of “C” flight had arrived at 16.00 hours], the driver caught up and gave information that US 8th Corps HQ evacuating Bastogne. Direct threat to area developing.”

German parachutists established roadblocks in an attempt to delay retreating units until the advancing panzer formations could reach them, but the Regiment squadrons forced their way through those they encountered. At 23.15 hours, the RAF Regiment armoured cars and the signals unit vehicles, under the command of acting Flight Lieutenant Hargreaves (officer in command of “C” flight) left the site near Houffalize en route for Brussels. They had an eventful journey.

“18th Dec 23:30hrs Hundreds of flares on both sides of the road towards Marche (later it was learnt that entire convoy had passed through the middle of enemy paratroops). The rear party had sent a driver to warn us the message did not arrive until the following day)”.

Eventually, they arrived at Brussels at 1400 hours on the 19th. F/L Hargreaves had left a rear party at the signals unit site, comprising F/L Jay of 2804 squadron, Flying Officer Henderson (officer commanding, 6080 signals unit), Flight Sergeant Bunney and “B” troop of “C” flight, 2742 Squadron who were to have a busy time.

“B” troop under F/Sgt Bunney were attempting to reach a 60 Group technical site south of Veilsalm to pull out the equipment left there. “The position was within 400 yards of enemy and small arms fire was encountered the whole time”. After destroying huts on the site with grenades and fire, “B” troop withdrew to Champlon.

The first attempt to reach the site was thwarted. “Arrived Odeigne approximately 1 mile from the site. Meeting American tank units moving up, considerable small arms fire, moved within 600 yards of site and found road blocked and held by US infantry pinned down temporarily by fire. Withdrew for further attempt”. That second attempt was also unsuccessful. “Again approached to within 1/2 mile of site only to be informed by the Americans, a tank battle was taking place on the area of the site.”

Trying to reach the site the next day to continue the job of destroying facilities to stop them falling into enemy hands, “B” troop were advised that “Enemy reported to be wearing American uniforms, using captured American equipment”.

“The enemy now through Bastogne …so pulled out for Namur. 10 kilos from Sin Sin, American sentry informed that paratroops had been dropped that morning.” Taking this on board, “B” flight encountered two civilians “both found with false identity cards, stamped with Swastika. Handed over to Americans and, whilst doing so, fired upon by further batch of paratroops. Returned fire and further German captured.” Passing through Namur, the rear party finally reached Brussels at 16.30 hours on the 22nd.

Little information of value could be obtained, small pockets of Germans being encountered miles apart and no real front had been established during the period we spent in the area. Ammo expended by the flight during the week was not wasted. The whole of 6080, 25 B.D.S. equipment vehicles and personnel was pulled out without loss. An interesting sidelight being the recovery of the pay left.

THE BATTLE FOR MEIKTILA
THE REGIMENT IN BURMA 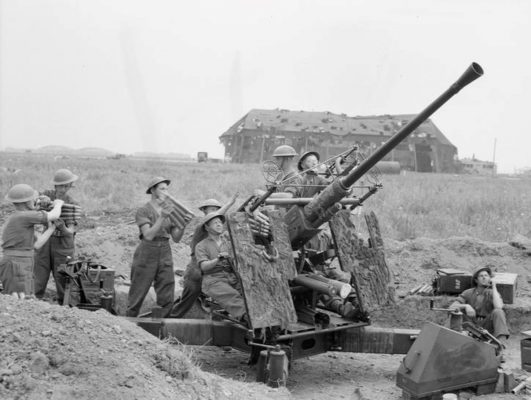 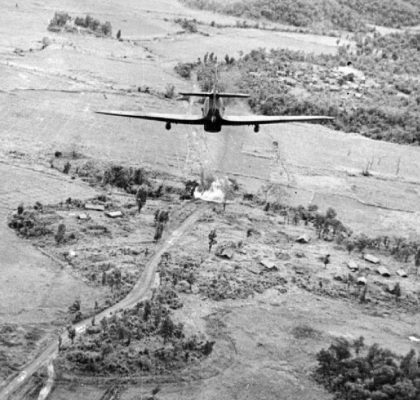 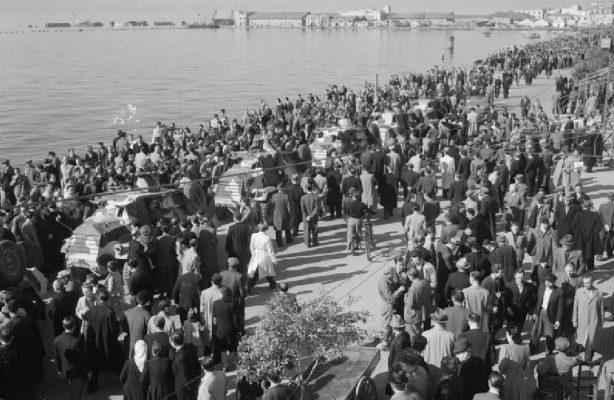 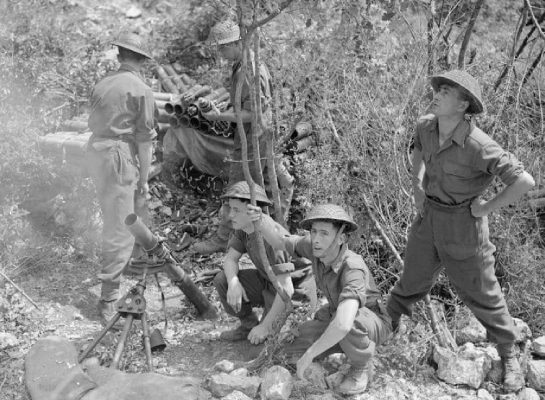 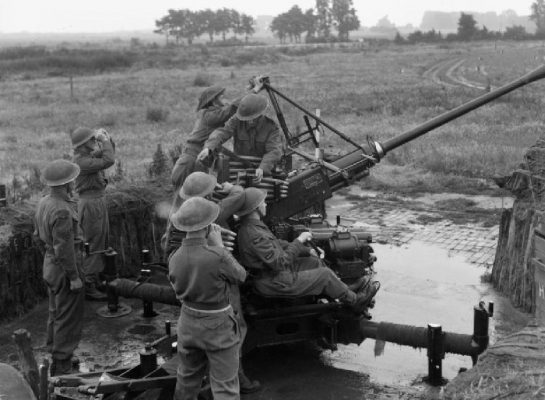 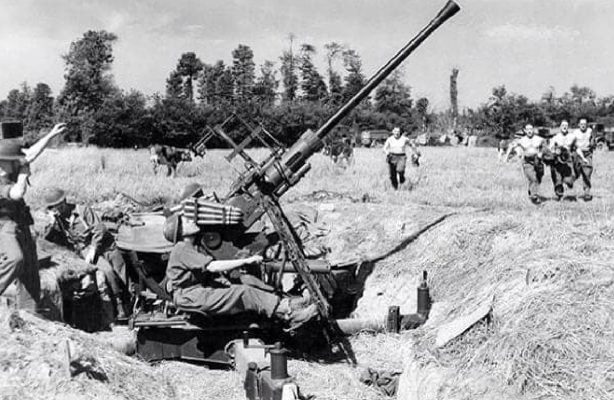